The contents of the stomach (e.g. acid, pepsin & bile) may escape the stomach and “reflux” into the esophagus, and even up into the airway.

A ring of muscle called the lower esophageal sphincter (LES) connects the esophagus to the stomach. It opens to allow food to pass into the stomach and closes to prevent contents from flowing back into the oesophagus. When the LES is weak or damaged, it does not open and close properly. This malfunctioning allows stomach contents to travel the wrong direction, or reflux. When this occurs routinely, it is called gastroesophageal reflux disease (GERD).

During a reflux episode, stomach contents may reach beyond the upper esophageal sphincter (UES), a ring of muscle at the top of the esophagus. When reflux makes its way through the UES and into the throat, this is known as laryngopharyngeal reflux (LPR).

Reflux is often progressive -- the more someone refluxes, the more damage will be caused to the esophagus and airways which in turn will cause further reflux. Some people are genetically predisposed to reflux, but lifestyle and diet also play a large role in reflux symptoms. Over-eating, late-night eating, eating fatty foods, carbonated drinks, smoking, and alcohol can all trigger reflux. Anatomical and physiological factors also contribute to reflux disease; most commonly hiatal hernia, pregnancy, obesity, and sluggish digestion. 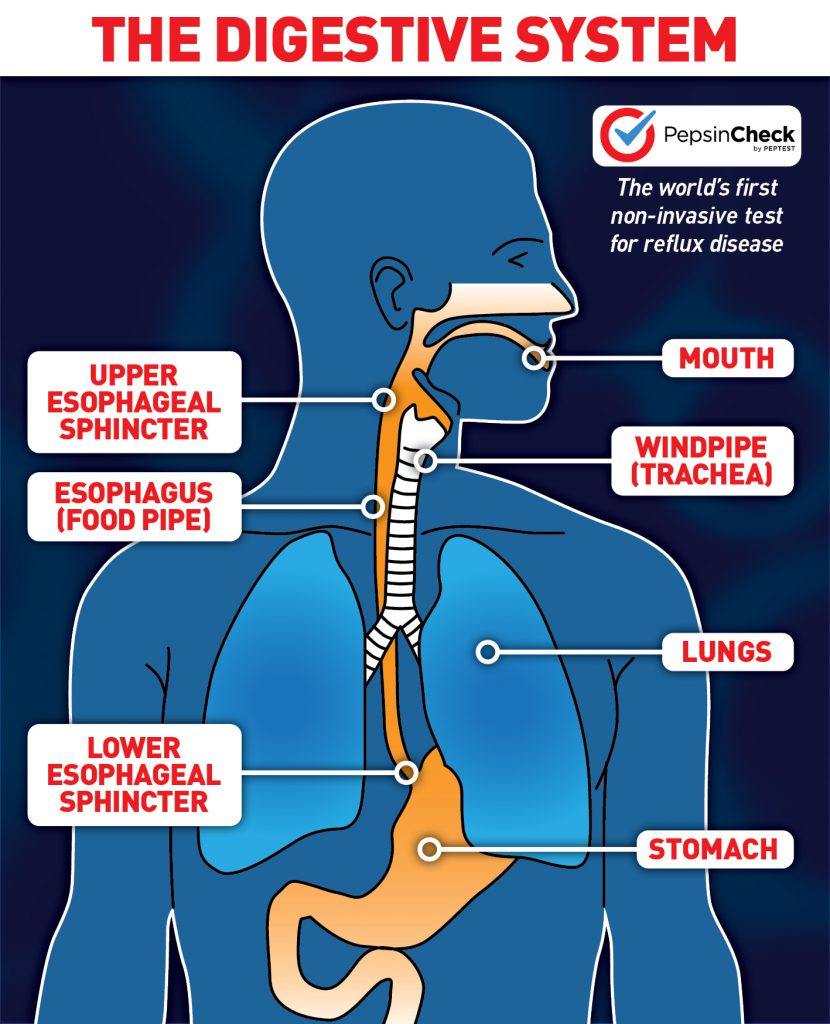 Laryngopharyngeal Reflux is associated with:

What tests can indicate reflux?

If you have common symptoms of reflux disease, such as heartburn, regurgitation and difficulty swallowing, your physician may recommend a non-invasive preliminary test, such as PepsinCheck. A positive outcome may lead to medication​ and/or ​lifestyle advice​, such as changing your ​dietary habits​.

If symptoms are persistent, you may be advised to go for tests that aim to confirm or disprove the diagnosis of reflux disease – these are typically ​invasive diagnostic tests.​

All expensive, invasive, time consuming and unpleasant for the patient.

How is reflux treated?

Following a positive reflux test your physician may suggest several treatment options depending on the severity of your condition and personal preference.

Treatment plans can include diet and lifestyle modifications, medication, therapeutic procedures, and surgery. Surgery is usually only recommended in cases of reflux disease that fail to respond to other treatments. Currently, Stretta Therapy is the only drugless, non-surgical procedure available. A physician applies Radiofrequency energy to the lower esophageal sphincter (LES) to strengthen the tissue and restore function.

A small amount of reflux is normal, but routine and severe reflux can lead to more serious complications, including Barrett’s esophagus, esophageal adenocarcinoma and potentially laryngeal cancer. If you have reflux symptoms, it’s very important to get evaluated and get your reflux under control. Like most diseases, early intervention is key!